Despite the political changes that shook the Arab region six years ago, the hope for Arab countries to fight corruption and end impunity has not seen any progress yet. On the contrary, the majority of Arab countries have failed to fulfil the will of the people to build democratic systems allowing for greater transparency and accountability.

The failure to fight corruption explains the sharp drop of most of Arab countries in the Corruption Perceptions Index 2016. 90 percent of these have scored below 50, which is a failing grade. The United Arab Emirates and Qatar have managed to remain above the average, in spite of their declined scores.

Five out of the ten most corrupt countries in the world are from the region: Iraq, Libya, Sudan, Yemen and Syria. These countries are also inflicted with political instability, war, internal conflicts and terrorism, stressing the fact that war and conflict fuel corruption and in particular political corruption.

Tunisia is one of the very few countries that slightly improved on the index. The country took some serious anti-corruption steps last year such as passing the Access to Information law, one of the most progressive laws in the region, and adopting a national anti-corruption strategy. In addition, the Anti-Corruption Agency has been empowered to do its job, and there is a good space for civil society to play a role in accountability. The parliament also adopted a Financial Court law, which allows the court to investigate Grand Corruption cases.

Yet Tunisia has still a long road ahead in its fight against corruption. Laws on whistleblower protection, conflict of interests and illicit enrichment policies remain missing. The Tunisian judicial system should also move forward in pending corruption cases, especially those that are ongoing since the revolution six years ago. 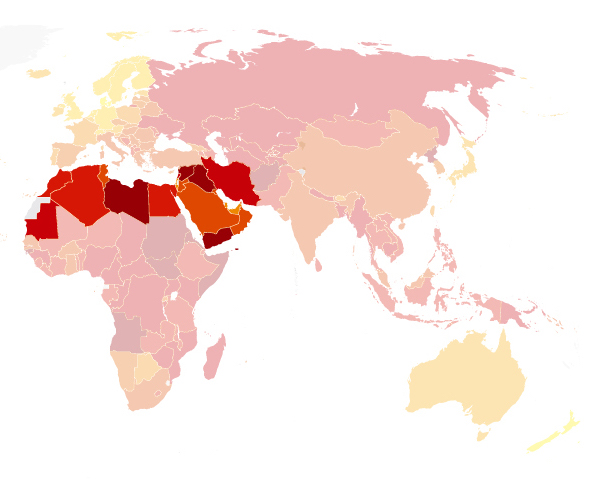 Gulf States have dropped on the index, as ruling families continue to hold power politically and economically, public freedoms are oppressed, and an active independent civil society is absent. The military involvement of these states in regional coalitions has raised the levels of secrecy and ambiguity of public expenditure and state budgets.

Qatar had the sharpest decline in the overall index this year by 10 points. The country has been implicated with FIFA corruption scandals, especially around the votes to host the 2022 World Cup, in addition to human rights violations of migrant workers.

Jordan also dropped below 50 compared with last year, despite the adoption of a new electoral law and integrity law, thus failing to reflect the true efforts of change. Many corruption cases were investigated, but no prosecution has taken place yet. Many reports have shown that investment is also hindered in the country as government fails to address petty forms of corruption such as bribery and nepotism.

Corruption levels in Egypt are still high in the absence of a real political will to fight it. In 2016, the government violated the independence of auditing institutions when the President Al Sisi sacked and sentenced the head of Egypt’s top auditing body, Hisham Geneina, for publicly exposing how much corruption has cost Egypt in the past four years.

What are the challenges and solutions?

In order for Arab countries to improve, they must ensure effective transparent systems that allow for accountability are in place. They must put an end to political corruption in all its forms. Governments should protect freedom of expression and stop persecuting anti-corruption activists, whistleblowers, and civil society organisations. The independence of the judiciary, as well as auditing bodies, must be respected to ensure that the corrupt are prosecuted and stolen assets are returned. All of this cannot be achieved without real and serious political will from governments to follow up on their commitments.

As the lowest-scoring region on the #CPI2019, with an average of 32, Sub-Saharan #Africa’s performance paints a ble… https://t.co/jOzVWD41os