The majority of Asia Pacific countries sit in the bottom half of the Corruption Perceptions Index 2016. 19 out of 30 countries in the region scored 40 or less out of 100.

Poor performance can be attributed to unaccountable governments, lack of oversight, insecurity and shrinking space for civil society, pushing anti-corruption action to the margins in those countries. High-profile corruption scandals, in addition to everyday corruption issues, continue to undermine public trust in government, the benefits of democracy and the rule of law.

The National Unity Government has made over 50 commitments to address corruption, promising change to the people of Afghanistan. There has been some progress. The Anti-Corruption Justice Centre held its first trials on large-scale and high-profile corruption cases, and the National Law on Procurement was enacted. The government must follow up on these commitments.

Timor-Leste, Laos and Myanmar continued to improve their scores in 2016. In Myanmar, the beginning of the National League for Democracy’s (NLD) government in March 2016, headed by Aung San Suu Kyi, brought much hope for change with the return to civilian rule. The NLD proposed action to reduce corruption, which is a good step towards committing to fighting corruption. However, progress has been overshadowed by the deadly violence in Rahkine State. This highlights a lack of oversight of the military, which allows abuse to take place with impunity. It is therefore unsurprising, despite improvements, that Myanmar scores only 28 in the index.

Cambodia, for the second year in a row, is the most corrupt South East Asian country on the list, with a score of 21. As space for civil society continues to be extremely restricted, this is not surprising.

Thailand dropped to 35 in its score this year, reinforcing the link between perceived corruption and political turmoil. Government repression, lack of independent oversight, and the deterioration of rights eroded public confidence in the country.

Thailand's new constitution, while it places significant focus on addressing corruption, entrenches military power and unaccountable government, undermining eventual return to democratic civilian rule. Free debate on the constitution was impossible; campaigning in opposition was banned and dozens of people were detained. The military junta also prohibited monitoring of the referendum. There is a clear absence of independent oversight and rigorous debate. 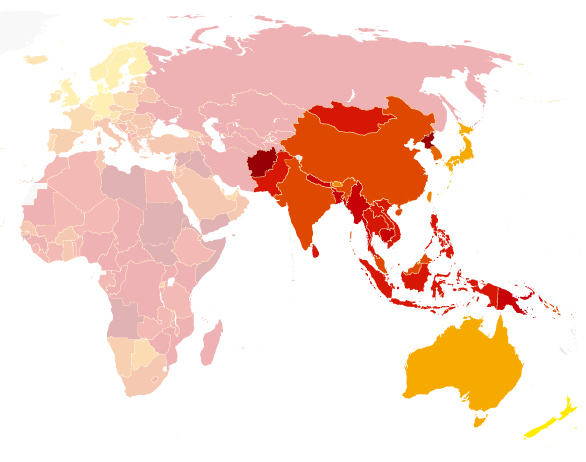 China increased by 3 points but remains at the poor score of 40 out of 100. In recent years, China has focused its anti-corruption efforts on catching “tigers and flies” – corrupt public officials big and small. This cannot come at the expense of transparency and independent oversight. Efforts to fight corruption must include a holistic approach involving civil society as well as the private sector.

Australia remains outside the top 10 countries on the index for the third consecutive year. Australia’s performance is marred by the recent foreign bribery scandals and threats to independent institutions. Following the report of the Australia Human Rights Commission (AHRC), which documents evidence of profound physical and sexual abuse in asylum seeker detention centres, the AHRC president’s credibility and integrity was unrelentingly attacked. Such intimidation undermines the independence of institutions like the AHRC, which are critical to functioning democracy.

India’s ongoing poor performance with a score of 40 reiterates the state’s inability to effectively deal with petty corruption as well as large-scale corruption scandals. The impact of corruption on poverty, illiteracy and police brutality shows that not only the economy is growing – but also inequality.

Some of the biggest stories of 2016 are in the “too soon to tell” category:

Correction 13 September 2017: This post has been amended in order to reflect revised 2015 CPI scores. South Korea's score did not drop by 3 points but by 1 point.