Willie Kimani (32), a Kenyan human rights lawyer, went missing after he left a courthouse in Nairobi on 23 June 2016. A week later, his dead body was recovered from a river outside of the capital, together with the bodies of his client, Josephat Mwenda, and their taxi driver, Joseph Muiruri.

The Administration Police is suspected of abducting, torturing and murdering the three in the light of Kimani’s investigation into police abuse on behalf of his client Josephat Mwenda.

Corruption remains a key challenge to policing in Africa. We view it largely as a manifestation of the impunity fed largely by lack of decisive action by policing authorities against those who go against their oath of service. If left unchecked, corruption will continue to undermine the ability of the police to discharge their responsibilities effectively by alienating those they are supposed to serve. Strong internal disciplinary processes are essential to keep policing truly disciplined and professional - Samuel Kimeu, Executive Director at Transparency International Kenya 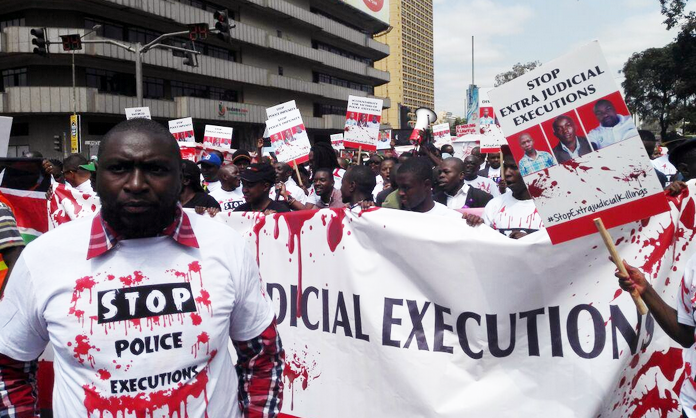 The horrendous murder of Willie Kimani, Josephat Mwenda and Joseph Muiruri is the latest episode of the police’s brutality and soaring levels of corruption in Sub- Saharan Africa. In 2013, Transparency International’s staffer in Rwanda, Gustave Sharangabo Makonene (33), was also brutally murdered by two police officers while doing his job as a coordinator of the Advocacy and Legal Advice Centre in Rubavu.

In Zimbabwe, where 92% of people see the police as extremely corrupt, the police has the highest frequency of bribery well above any other sector.

Impunity and corruption are also endemic in the police sector in Côte d’Ivoire where security checkpoints are used by the police to extort bribes from the by-passers.

The story is similar across the region. Nearly 75 million people were estimated to have paid a bribe in 2015 – some to escape punishment by the police or courts, or to get access to the basic services that they desperately need.

Governments must act immediately to reform the police sector, end the impunity of corrupt police officers and investigate corruption and abuse of power whenever and wherever it occurs. It should not cost another innocent life for the Kenyan government or any other African governments to start taking action against corruption. Law enforcement is the bedrock of citizens’ security and justice for democratic and prosperous countries.

WHAT MUST BE DONE

Tell President of Kenya, Uhuru Kenyatta: Please Secure Justice for the Murders of Willie, Josephat and Joseph- sign this petition

In whose interest? Political integrity and corruption in Africa

What accounts for the wide disparity in peoples’ perceptions of the integrity of elected representatives in different countries? In this piece, we will to look at various forms of…

Citizens speak out about corruption in Africa

The Global Corruption Barometer (GCB) – Africa, reveals that while most people in Africa feel corruption increased in their country, a majority also feel optimistic that they can…

Our recent hackathon in Nairobi finds women at the crossroads of communication technology and anti-corruption work.

What climate change and corruption mean for land security

Corruption is making the right to land ever more precarious. Whether bribes for land licences, or nepotistic resettlements, corruption in land management must be tackled. Staff…

Do you believe in a world free of corruption too?

We need your help to push for progressive reforms and to hold the powerful to account.

If you want to support our work, please consider a donation. We’ll make every penny count in our fight against corruption.