From Spain to the UK and Turkey, support for populist and nationalist movements is on the rise in Europe and Central Asia. While the reasons are manifold and complex, corruption is central to the story – both the failure of governments to properly address corruption and their complicity in corrupt or clientelist schemes.

For our new report People and Corruption: Europe and Central Asia, Transparency International spoke to nearly 60,000 citizens in 42 countries in Europe and Central Asia about their daily life experiences with corruption. One in three citizens in in the region think corruption is one of the biggest problems facing their country. This figure rises to two in three in Moldova, Spain and Kosovo, showing that urgent actions against the abuse of power and secret deals are needed. 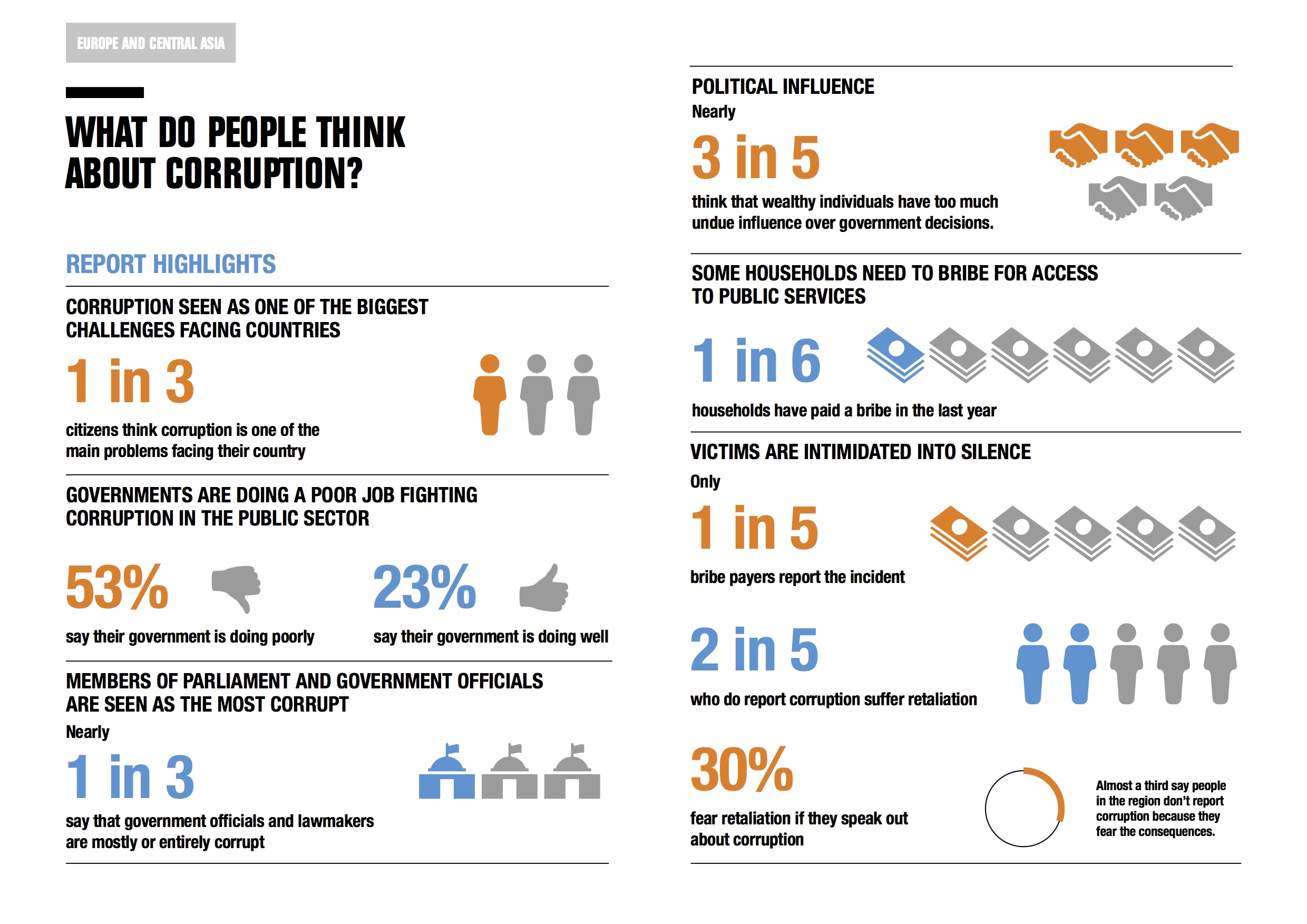 People are also highly dissatisfied with the way governments are tackling the corruption risk in Europe and Central Asia. Over half (53 per cent) said that their government is doing badly at fighting corruption, while less than a quarter (23 per cent) say that they are doing well.

The governments of Ukraine (86 per cent), Moldova (84 per cent), Bosnia and Herzegovina (82 per cent), and Spain (80 per cent) were judged worst by their citizens. 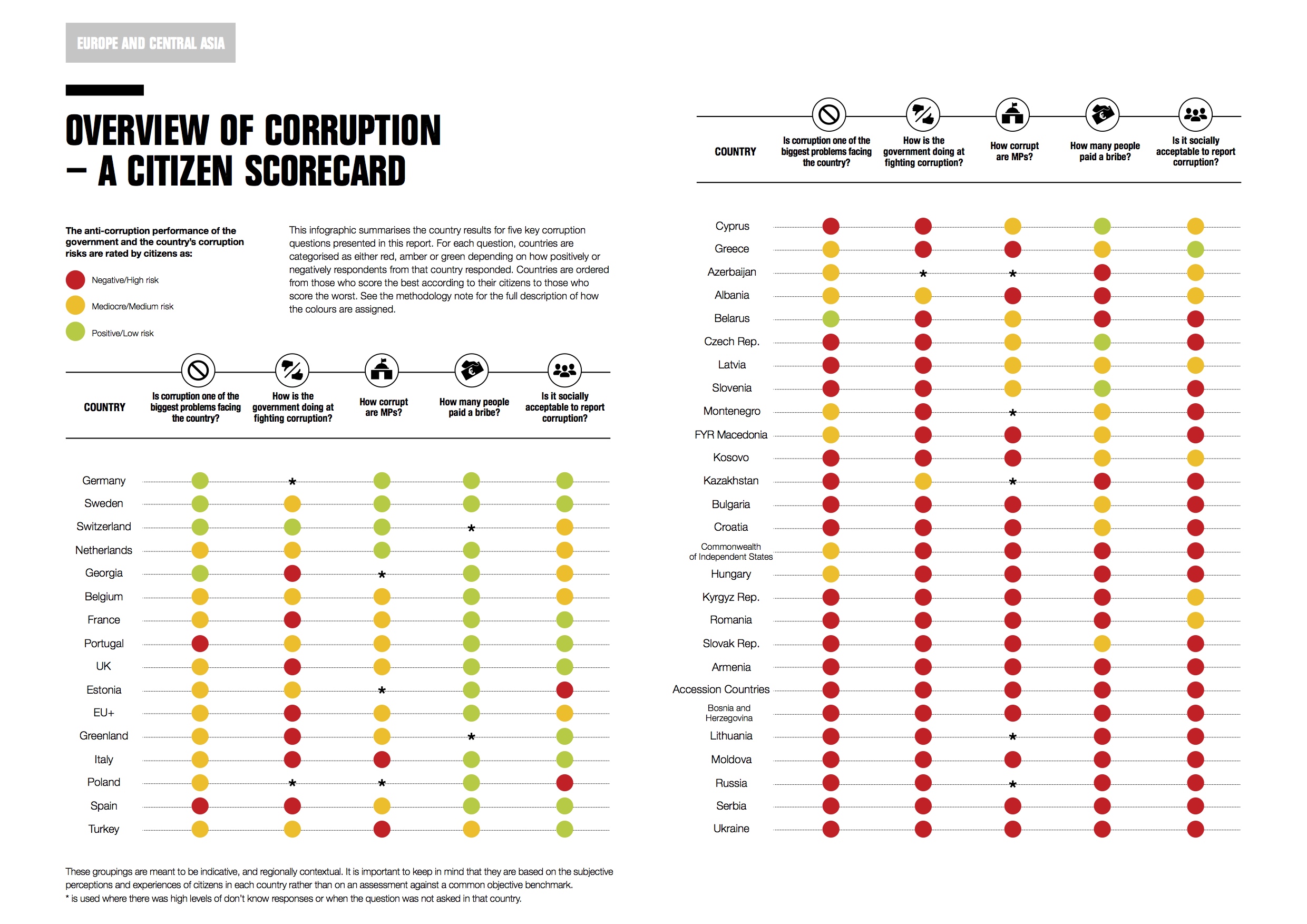 Bribery is a far too common experience for many households in the region. On average, one in six households paid a bribe for access to public services. Although few households paid bribes when coming into contact with public services in EU member states, rates were significantly higher further east; the highest rates were in Tajikistan (50 per cent), Moldova (42 per cent), Azerbaijan, the Kyrgyz Republic and Ukraine (38 per cent for each). Romania had the highest rate for an EU member state at 29 per cent, followed by Lithuania with 24 per cent. 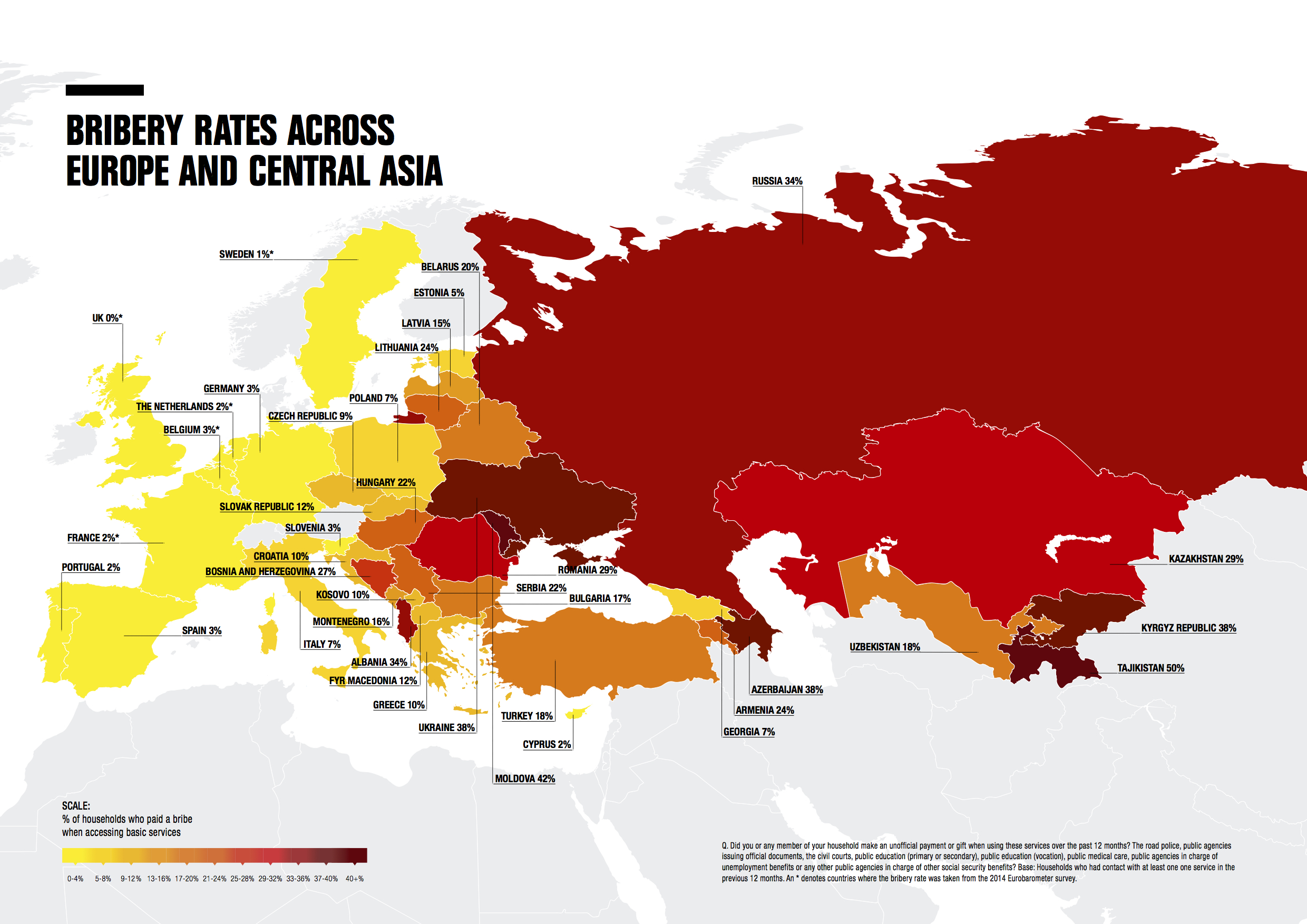 “Corruption is a significant problem all across the Europe and Central Asia region. In EU countries many citizens see how the wealthy and those in government distort the system to their advantage,” said José Ugaz, Chair of Transparency International. “Governments are simply not doing enough to tackle corruption because individuals at the top are benefiting. To end this deeply troubling relationship between wealth, power and corruption, governments must require higher levels of transparency, including around who owns and controls companies through public beneficial ownership registries.”

“By their very positions at the top of the power pyramid, corrupt elites and oligarchs are hard to remove. But we have seen that it can be done if people stand together to demand higher standards from their leaders and the judiciary acts independently to hold them to account,” said Ugaz.

Tackling corruption will require a clear commitment from all levels of government, the private sector and civil society working together to address corruption.

Transparency International makes four key recommendations to reduce political corruption and help people speak up without fear of retaliation. Governments across Europe and Central Asia should: