Illegal government surveillance has been a concern in Georgia for several years. The existence of an archive of thousands of audio and video records obtained as a result of mass illegal surveillance of politicians, journalists, civil society representatives and other activists was clear evidence that for many years, the right to privacy was violated in the gravest way.

TI Georgia has repeatedly emphasized that the special servers, so-called black boxes, installed by (or upon request of) the Ministry of Internal Affairs in communications service providers’ infrastructure, give the possibility to law enforcement agencies to directly access all communications data, including all phone calls, text messages and internet traffic. This real-time monitoring is done through a direct connection and no further assistance from telecom companies is needed.

When the Georgian Dream government took power a year and a half ago, it vowed to establish strong mechanisms to stop illegal systematic surveillance. A year later, no steps in that direction have been taken. With the new government, many had hoped that changes would follow expediently, especially given that several representatives of the current Georgian government were victims of the past secret surveillance themselves.

Unfortunately, it seems that the authorities are not eager to engage in a meaningful reform that would put in place necessary guarantees to the right to privacy.

It is certain that the government has very good knowledge of all the problems surrounding secret surveillance, both with regard to the ‘black boxes’ and the current legal framework that fails to meet the minimum human rights guarantees. However, we were interested in what the Georgian population thinks about secret surveillance?

In order to get a better sense how people perceive wiretapping, we included several relevant questions into an opinion poll that CRRC conducted for us. In the period of 3-26 October 2013, 1,918 adults (18+) were interviewed face-to-face across the country.

The results of this nationwide poll indicate that Georgians are neither willing to share a secret nor their opinion about the current political events in Georgia with a friend over the phone. 63% of the respondents said that they would not share a secret over the phone and 69% would not voice a critical opinion about political events in a phone conversation. 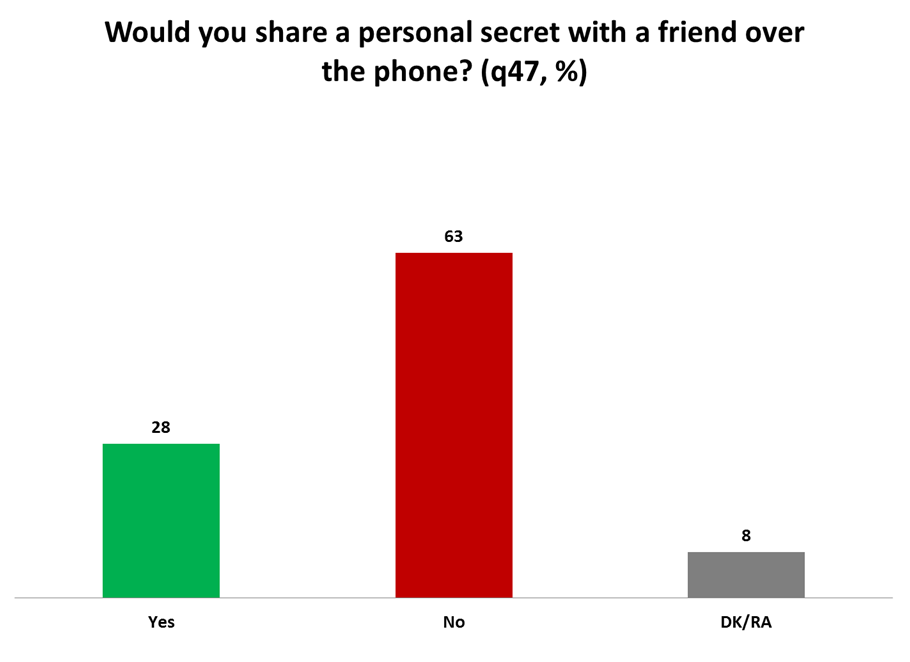 Only 28% do not mind sharing a secret with their friend over the phone.

And even less, only a bit over 20% of respondents, do not see any problem in sharing their critical opinions related to politics through the phone. 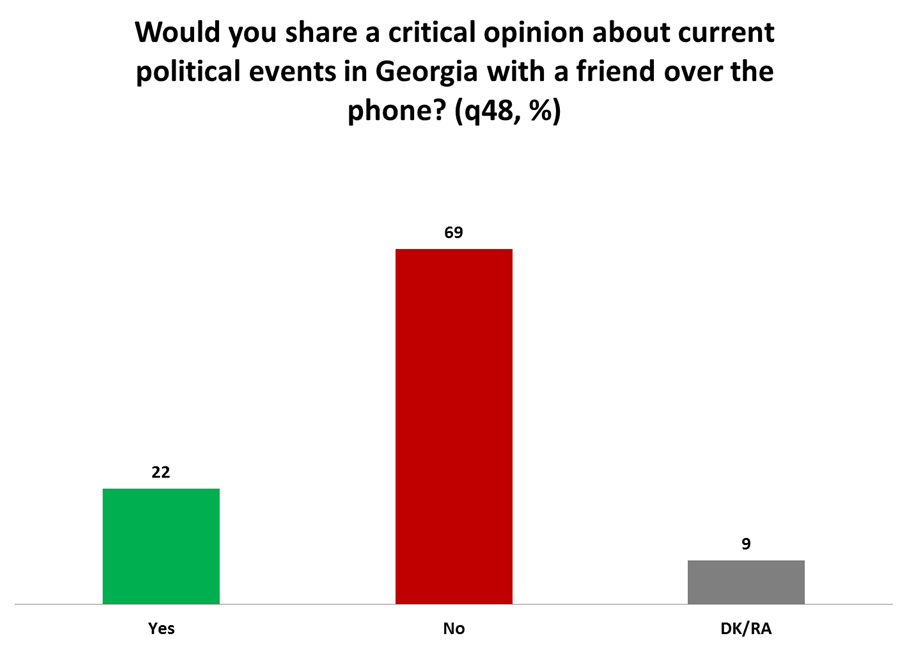 The results of the poll clearly indicate that Georgians do not really feel secure in terms of privacy when it comes to their phone communication, and this applies both to conversations that purely contains one’s private life secrets, and conversations of a critical political nature.

Georgians’ reluctance in sharing private information or critical political opinions over the phone is certainly not fully unjustified. As stated above, at this very moment, the government has technical ability to directly monitor all communications. The situation is further exacerbated by the outdated legal regulations that do not meet international standards and the rule of law. Monitoring of electronic communications must be subject to legal and democratic constraints, the authorities should not abuse their power and there should be adequate independent oversight and control.