The 2013 Survey for petty corruption in Greece, indicates that the extent of domestic petty corruption has decreased significantly both in the Public and the Private sector. It is the third consecutive year, since 2010, that corruption is descending. In comparison to 2012, the percentage of corruption in 2013 is 15.1% lower (while in 2012 15.7% shrank during the previous year).

Amounts asked and amounts given

During 2013, a greater number of Greek households refused to pay small bribes in the public sector services but also in the private sector.

Specifically, 29,6% of the people asked, refused to pay small bribes in the public sector and 33% in the private sector.

The reasons of the refusal are mainly two: firstly, the ongoing economic crisis has resulted in the reduction of the Greek households income and secondly, the growing recognition of the problem of corruption by society.

Even in 2013, respondents stated that they perceive the non issuance of receipts in transactions as a corruption case

Petty Corruption in the Public Sector

The public sector still remains at the top of the petty corruption list. First in the list are:

An increase of the petty corruption cases in hospitals for 2013 is +5%. On the contrary, petty corruption has been reduced to tax offices (-1,2%) and in construction license bodies (-2,8%).

Unlike the public sector, the average amount of money given as a bribe in the private sector has been reduced (from €1,442 in 2012 to €1,333 in 2013). Most of the corruption cases reported relate in the Health Sector, in the auto inspections or issuance of driving licenses, legal practitioners and the Construction – License Bodies.

The Geographical allocation of corruption in Greece

According to the Survey, the highest percentage of total corruption is evidenced in:

The 2013 Survey indicates the social profile of the petty corruption payers is are mostly male, between the ages of 45-54, educated, under a self-employed or employers. 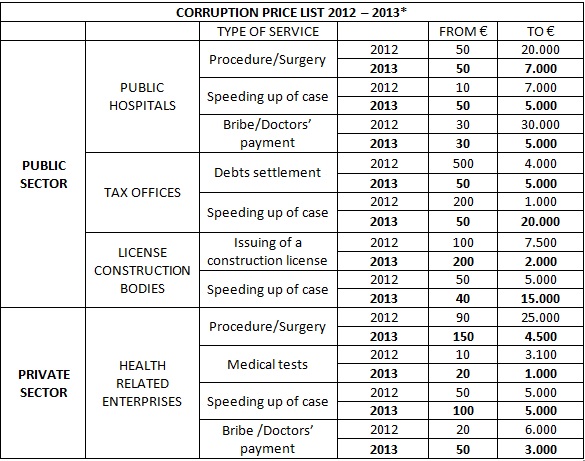 This is the seventh year (since 2007) that TI-Greece conducts the “National Survey on Corruption” in Greece, which presents the size of petty corruption that burdens the Greek households. The 2013 Survey occurred in twelve waves over the period January-December 2013, using a structured questionnaire addressing to a sample of 12.108 people. The data comparative analysis and update assessments significantly contribute to the survey’s credibility and validity, setting it an important scientific tool. The 2013 National Survey on Corruption in Greece was conducted within the framework of the Project "Conduct of an Integrated National Survey on Corruption" that was included in the Operational Program "Administrative Reform 2007-2013" of the NSRF.