In a last ditch attempt to get G20 leaders to take the fight against corruption seriously, Transparency International and its Argentinian chapter Poder Ciudadano, have lined streets in Buenos Aires with posters with the slogan “#G20TakeAction: Implement Your Anti-Corruption Commitments” in advance of this week’s summit.

“G20 leaders seem to have been too busy arguing among themselves to pay attention to their own anti-corruption policy recommendations, which we’ve been reminding them of through the official engagement channels,” said Maria Emilia Berazategui of Poder Ciudadano. “So we decided to put the message somewhere they can’t miss it – on the avenue leading to the summit venue.” 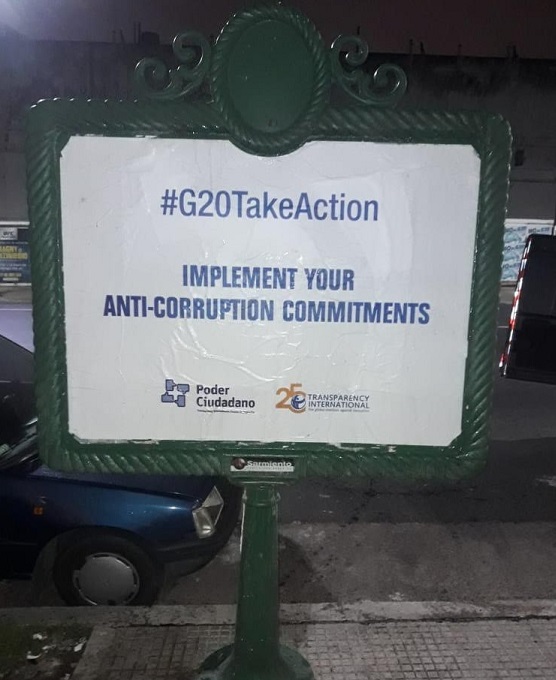 The G20 has previously adopted anti-corruption commitments regarding the publication of asset declarations for public officials, increased transparency in public procurement, and requirements for companies to disclose their ultimate owners. In April 2018, a Transparency International report found that most G20 countries were failing to implement the group’s own principles on ending the anonymous company ownership that fuels corruption.

Through the C20, Transparency International and Poder Ciudadano have also recommended that the G20 tackle the revolving doors between public and private sectors, and improve the accountability and transparency of state-owned enterprises.

Pablo Secchi, Executive Director of Poder Ciudadano, stated: “Despite repeated statements that corruption is a priority and the development of more than 60 anti-corruption resources, too often combatting corruption remains an afterthought in G20 leaders’ decisions and actions. We believe that enough commitments have been made, and now is time to put them into practice.”

Delia Ferreira Rubio, Chair of Transparency International, said: “Several of the world leaders gathering in Buenos Aires this week are clamping down on the freedom of the media, civil society and the independence of the judiciary in their countries, or openly threatening to do so. This shows that they aren’t serious about tackling corruption, even if they claim to be cleaning up their countries. This summit under Argentina’s presidency could be an opportunity to do something about corruption and actually follow through on their commitments. But will we see any action?”