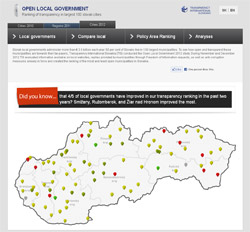 Visit our Slovak chapter’s Open Local Government ranking website. Compare cities over time, and see how our chapter is working to improve city governance across the country.

Local governments provide many of the services and infrastructure that citizens rely on in their daily lives. When municipal governments are stained by corruption, people suffer.

Two weeks ago Transparency International Slovakia launched its Open Local Government results, an evaluation of 100 largest cities in Slovakia. It is the second time the chapter has assessed the cities across 111 indicators of transparency.

The ranking covers cities that are home to half of the Slovak population. These local governments administer over €3.5 billion each year.

The good news is that 80 out of 100 cities improved in the span of two years, in part an indication of the ranking’s impact and the media pressure it created when first released in 2010.

What’s behind the improvement?

The main reason Slovak cities have improved since the last ranking is the higher quality and amount of information that cities publish on their websites. While in 2010 only a slight majority of cities published minutes from municipal parliament sessions online, this year this information was published by three-fourths of the cities. The number of municipalities publishing tender announcements for public contracts increased similarly.

Since the first survey, the quantity of cities requiring codes of ethics for their employees grew from 24 to 36.

How our chapter helps

One way our chapter helps municipalities improve is through its Transparent Town audit. The chapter identifies gaps and suggests reforms local governments can undertake. The northern Slovak city of Martin offers an example that others can follow. It was given the prestigious UN Public Service Award for its anti-corruption reforms. A year after the start of the project, the first city purchases were carried out by electronic auctions, saving up to quarter of expected expenditures.

The chapter has also ranked Slovakian state-owned companies on their transparency, and set up an open database of public procurement tenders that allows members of the public to see which firms are winning contracts. So far, the database has shown over 30,000 contracts worth more than €22 billion.

As follow-up to the regional analysis of Eastern Europe and Central Asia, additional examples from Albania, Kosovo and Georgia highlight the need for more progress in…

Europe: a playground for special interests amid lax lobbying rules

Our report assesses lobbying across Europe, looking at responses by governments and institutions to the risks of undue influence.

No impunity: the power of accountability

Unrelenting pressure on those who act corruptly with impunity will become a hallmark of Transparency International’s advocacy.