A new report by Transparency International UK’s Defence and Security Programme – the Government Defence Anti-corruption Index – assesses what countries do, and fail to do, to counter corruption in their defence sectors. Corruption in the defence industry corrodes national security, good governance, and responsible budgeting. But countries can put in place proper protocols to mitigate, if not wholly prevent, the scourge of corruption.

Corruption in defence is dangerous, divisive and wasteful: every one pays the cost.

The index of 82 countries, which represent 94 per cent of military spending in 2011, relies on the results of an extensive questionnaire to place countries into one of six bands based on their performance in a variety of categories. 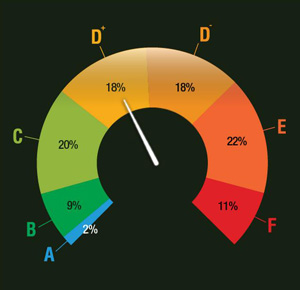 Visit the study’s dedicated website, http://government.defenceindex.org, for the full report, results and analysis.

Assessors for the 82 countries provided answers to a questionnaire based on our unique five-part overview of corruption risks in the defence sector. These context-specific analyses were carried out by regional assessors, and subjected to scrutiny by expert peer reviewers.

The analyses are complemented by a strong actions section. We want governments to make this traditionally secretive sector, which involves large public contracts, more open. Legislators also have a role to play, as they should have stronger controls and oversight of the sector, possessing the teeth and access to cut corruption down. It doesn’t end there: citizens should also have better access to information about defence budgets and purchases. After all, it’s their money that is being used.

We hope that this comprehensive and unprecedented study will serve as a tool for governments, companies and citizens to hold defence institutions accountable.

Read more on the topic and join our discussion on the blog:

Out in the open: How public beneficial ownership registers advance anti-corruption

Public registers of beneficial ownership were unthinkable a decade ago, but impact to date makes a strong case for global adoption.

Why corruption matters in the EU elections

What voters should know as they head to the polls.

Whistleblowing in Europe: the time has come to tell a new story

Putting corruption out of business

We surveyed 3,000 businesspeople in 30 countries about corruption. Our interactive tool reveals the results.