In many countries you can pay off police officers to ignore any crime, however horrific and devastating – it’s just a matter of price. In Zimbabwe a nine-year old girl was raped on her way to school by a man who infected her with HIV. The police initially arrested her attacker, but then released him in secret. The reason: he paid a bribe.

Nearly 75 million people in Sub-Saharan Africa are estimated to have paid a bribe in the past year – some to escape punishment by the police or courts, but many forced to pay to get access to the basic services that they desperately need.

For our latest report People and Corruption: Africa Survey 2015, we partnered with Afrobarometer, which spoke to 43,143 people across 28 countries in Sub-Saharan Africa.

MOST AFRICAN GOVERNMENTS FAILING THEIR PEOPLE

1. CORRUPTION SEEN TO BE ON THE RISE

The majority of Africans (58%) say that corruption has increased over the past year. This is particularly the case in South Africa where more than four-in-five citizens (83%) say they have seen corruption rise recently.

2. MOST GOVERNMENTS FAILING IN FIGHT AGAINST CORRUPTION

There is no government which is rated positively on its anti-corruption efforts by a clear majority of its citizens. Out of 28 governments, 18 are seen as completely failing to address corruption.

3. POLICE AND PRIVATE SECTOR SEEN AS MOST CORRUPT

4. BRIBERY AFFECTS MORE THAN ONE-IN-FIVE AFRICANS, HURTS THE POOR MOST

5. POLICE AND COURTS HAVE HIGHEST RATE OF BRIBERY 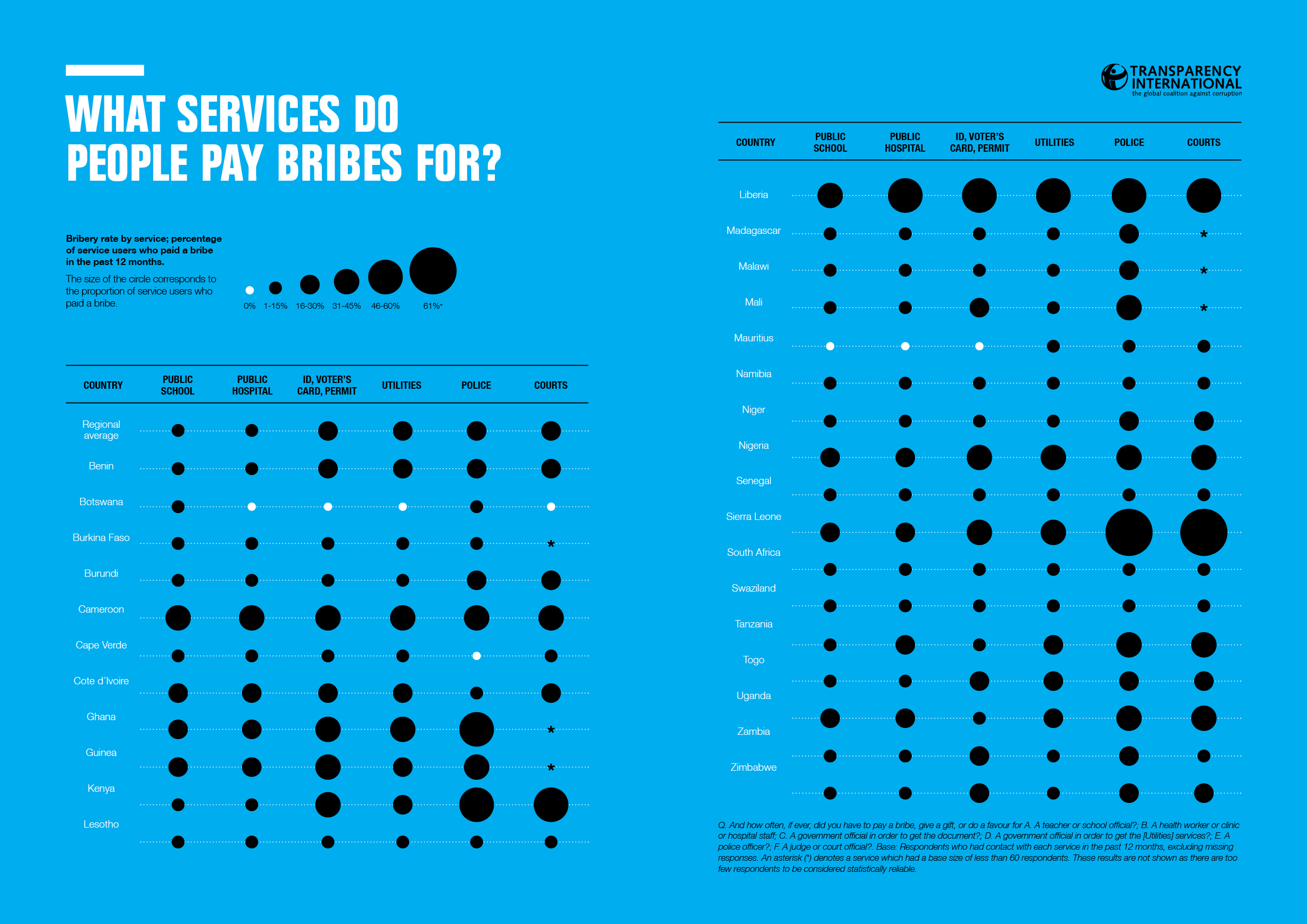 Out of six key public services, people who come into contact with the police and the courts are the most likely to have paid a bribe. This is consistent with our previous surveys and highlights the lack of progress made in addressing bribery in these two institutions, which are crucial for citizen security and the rule of law.

People in the region are divided as to whether ordinary people can make a difference in the fight against corruption – just over half of people think that they can (53 per cent), while 38 per cent think they cannot. Only roughly one-in-ten people who paid a bribe actually reported it.

7. BUT, TACKLING CORRUPTION IS POSSIBLE

There are a few countries in which citizens see low levels of corruption in their public institutions and see corruption as on the wane in their own country. The views of citizens in Botswana, Burkina Faso, Lesotho and Senegal are particularly positive.

WHAT NEEDS TO HAPPEN

The region faces a serious challenge in ridding itself of corruption: although people told us that reporting incidents of bribery is one of the best ways to stop corruption from happening, they also told us that many people do not report bribery because they are scared of suffering retribution and think reporting mechanisms are ineffective.

In order to effectively prevent corruption in the region greater efforts need to be made to protect whistleblowers from retribution, improve the effectiveness of reporting channels, and raise public awareness about how and where they can report corruption.

Many countries in the region have seen threats and violence against civil society, making it dangerous to operate and difficult to hold governments to account. Governments must create safe conditions for civil society to undertake anti-corruption work, and governments need to guarantee the operational and physical freedom of such organisations.

See the rest of African Voices Against Corruption.

A strong civil society is crucial to fighting corruption. In the case of Zimbabwe, Transparency International helped the family fight for justice and the attacker is now in prison. Throughout the region we will continue fighting for governments to improve their transparency and accountability to citizens.