Anti-corruption organisation, Transparency International (TI) Ireland has published its second Speak Up report based on data collected from over 850 callers to its Speak Up helpline from 2011 to beginning of 2017. The helpline has offered free support to witnesses of wrongdoing and whistleblowers since 2011.

The Speak Up report notes a significant increase in complaints from the public about the Gardaí to the helpline. The largest number of Garda-related complaints related to the alleged failure to investigate crimes reported to them. The Health sector generated the second largest number of calls to the helpline during the same period. The most common concern raised by callers from the sector was whistleblower reprisal. The Banking and Finance sector appears in the top three most complained about sectors for the first time. The largest number of complaints to the Speak Up helpline were made about retail bank lending practices and the conduct of ‘vulture funds’.

‘It’s important to note that the Speak Up report does not suggest that any one sector is more corrupt than any other. However, the helpline data as well as the findings of our Integrity at Work survey will be helpful to policy makers, regulators and employers in supporting witnesses and whistleblowers and inform their approach to addressing future wrongdoing’, said John Devitt, Chief Executive of TI Ireland.

The report also includes the findings from the Integrity at Work Survey 2016 which, for the first time, measured the attitudes and experiences of Irish private-sector employees and employers to whistleblowing. The Integrity at Work Survey found that of those that witnessed wrongdoing (the equivalent of over 250,000 people) during the course of their career, 63% (the equivalent of 160,000 people) shared their concerns with a responsible person. Of those who witnessed wrongdoing 69% of women said they reported their concerns, while 58% of men did. 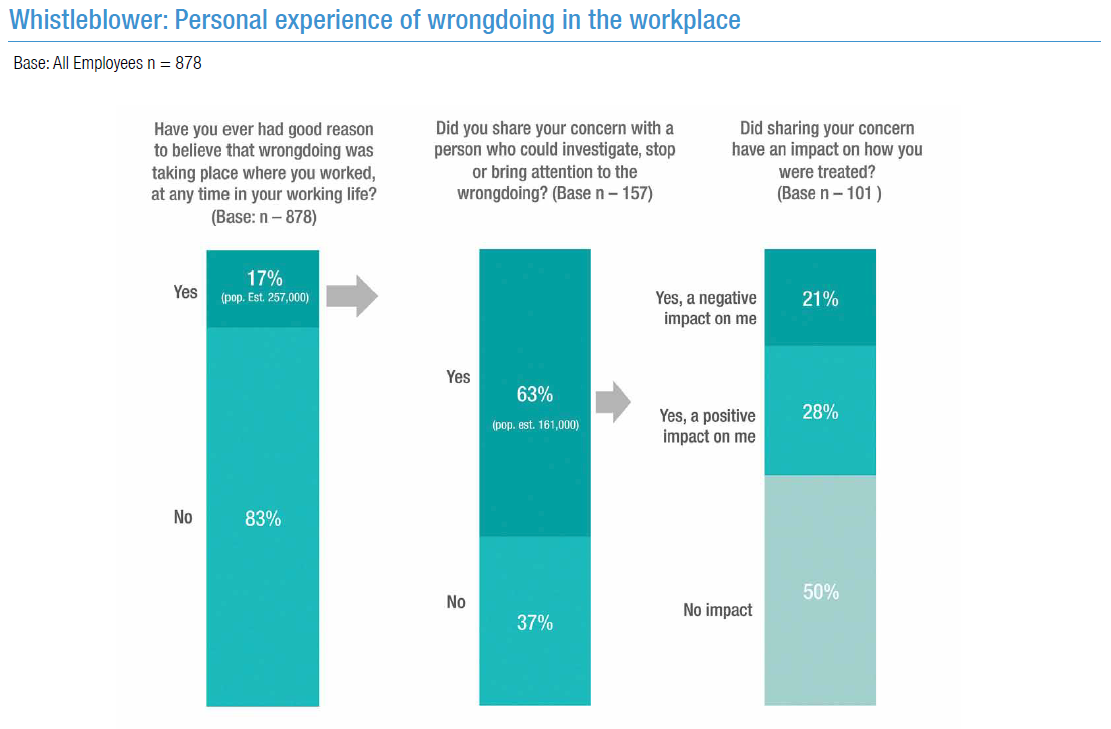 ‘Some of the survey’s findings might be surprising given we only hear about the negative experiences of whistleblowers in the media. It appears that whistleblowing is far more common than is generally recognised because not every 'whistleblower' thinks of themselves as such. It’s more likely that people will be identified or self-identify as whistleblowers if their employer or the authorities take retaliatory action or attempt to cover-up the wrongdoing. Employees need to understand that blowing the whistle on wrongdoing doesn't always have to end badly. But employers also need to meet their responsibilities to act on their employees’ concerns and ensure they don’t suffer as a result of speaking up’, added Mr Devitt.

The stereotype of the whistleblower as someone who is disloyal to their employer or who goes straight to the press is also not supported by the findings of the survey with only 2% of employees saying that they would report to the media. This is in contrast to a combined total of 95% of respondents who said that they would bring information to someone inside their organisation.

The survey also points to more positive attitudes to whistleblowing among employers than employees with 91% of employers and 77% of employees saying that they believed whistleblowers should be supported, even if it meant revealing confidential information. 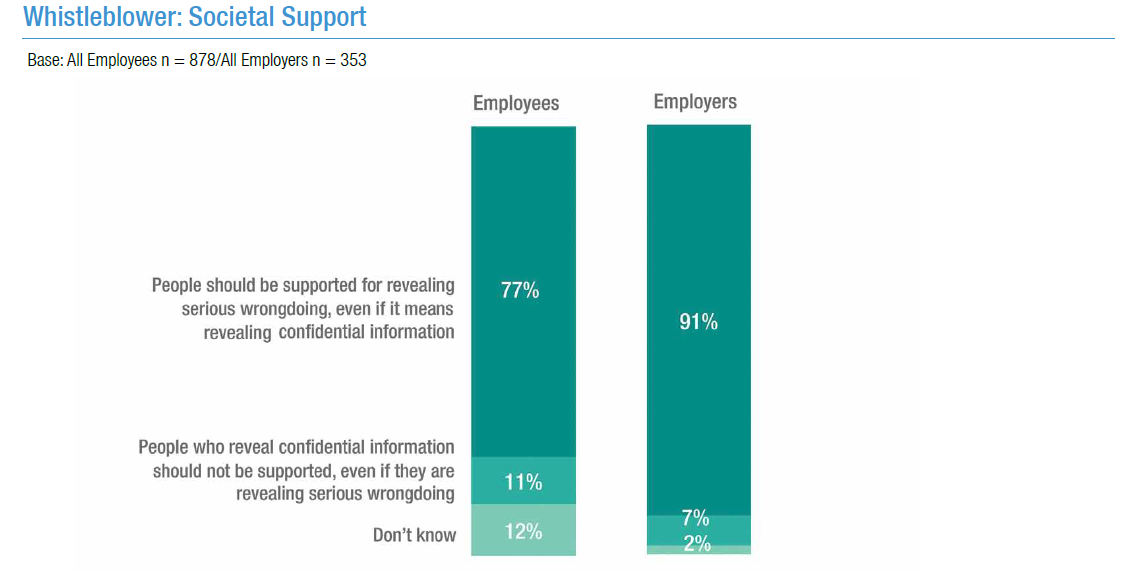 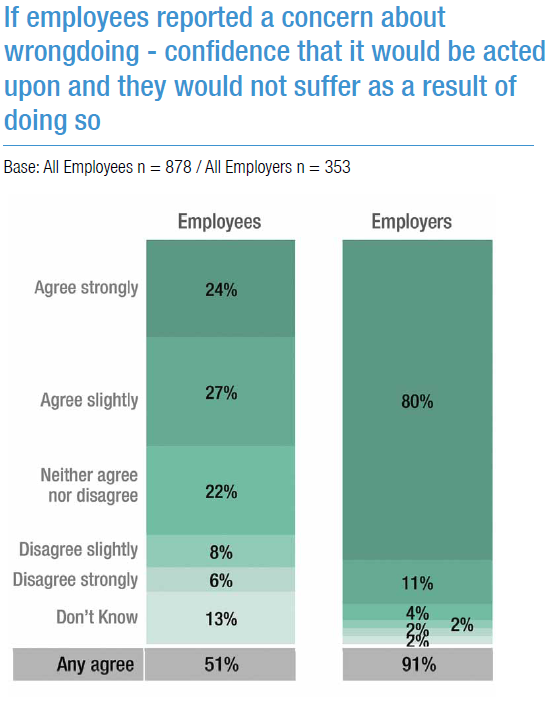 ‘Employers need to make sure their staff are informed of their rights and responsibilities under the Protected Disclosures Act. It’s also vital that business and not-for-profit employers put whistleblowing procedures in place, but it’s unlikely that they will make the effort unless they are incentivised or are compelled to do so. The Act obliges public-sector employers to have whistleblowing procedures in place. We recommend that Ireland follows the lead of the French and Dutch governments and extends these requirements to all employers’, Mr Devitt added.

TI Ireland has noted that the Protected Disclosures Act is considered to be one of the strongest whistleblower-protection laws in the world. However, it points out that the Act needs to be strengthened to make sure it is fit for purpose. Among the recommendations TI Ireland make include the extension of whistleblowing protections to volunteers and students; the removal of caps on compensation for awards to workers who are found by the Workplace Relations Commission to have suffered a detriment as a result of making a protected disclosure; and the reversal of the burden of proof to employers to show they were not responsible for the penalisation of a whistleblower. The Department of Public Expenditure and Reform are currently undertaking a review of the first three years’ implementation of the Act and TI Ireland will lobby to see the legislation strengthened and clarified further.

Eighteen Irish employers, including An Garda Síochána and the Department of Justice and Equality have joined TI Ireland’s Integrity at Work programme during 2017. Membership of the programme requires employers to sign the Integrity at Work Pledge which commits them to sign-post their staff to the Speak Up helpline or other supports, protect workers who report wrongdoing, and take action in response to those reports. Member organisations also allow their workers to report concerns they have about their treatment or lack of action taken by their employers in response to disclosures. TI Ireland can make recommendations to the member organisation based on those reports.

Irish workers are also able to avail of free legal advice from the Transparency Legal Advice Centre which was launched by TI Ireland in 2016. The law centre specialises in providing advice to whistleblowers and gave free legal advice worth an estimated €260,000 in its first year (it has provided an estimated €400,000 in free legal advice to date). The Speak Up helpline can refer callers on to the law centre after an initial assessment to determine whether the client is seeking to make or has made a protected disclosure. Access to the helpline and legal advice centre is not dependent on whether a worker’s employer is a member of the Integrity at Work programme. Seed-funding for Integrity at Work and the Transparency Legal Advice Centre has been provided by the Department of Public Expenditure and Reform and the Department of Justice and Equality.