Brussels, 17 September 2013—Two-thirds of parliament and legislatures fail to exercise sufficient control over their Ministry of Defence and the armed forces, according to a new report by Transparency International UK’s Defence and Security Programme (TI-DSP). Amongst those, 70 per cent of the largest arms importers in 2012 leave the door open to corruption.

The study—a spin-off from the Government Defence Anti-Corruption Index 2013 (GI) which analysed what 82 countries do to reduce corruption risks in the sector— places countries in corruption risk bands according to detailed assessments across seven areas in which parliaments play a vital anti-corruption role. It also shows, through detailed case studies, how parliaments and legislatures can improve oversight of defence.

Fourteen countries were placed at the bottom of the banding, exhibiting critical risk of corruption due to lack of legislative defence oversight: Algeria, Angola, Cameroon, Cote D’Ivoire, Democratic Republic of Congo, Egypt, Eritrea, Iran, Libya, Qatar, Sri Lanka, Saudi Arabia, Syria, and Yemen. Only four nations—Australia, Germany, Norway, and the United Kingdom—were amongst the top performers, with very low levels of corruption risk, followed by twelve countries which are at low risk due to better performance by their parliaments.

“Corruption in defence is dangerous, divisive and wasteful, and the cost is paid by soldiers, companies, governments, and citizens. Most legislatures are failing voters by not acting as proper watchdogs of this huge sector. Whether the problems are due to the political environment, poor legislation, or poor commitment by parliamentarians, the good practice examples in this study can help them improve,” said Mark Pyman, Director of TI-DSP.

Transparency International estimates the global cost of corruption in the defence sector to be a minimum of USD 20 billion per year, based on data from the World Bank and the Stockholm International Peace Research Institute (SIPRI). This is more than the combined international development aid provided by Canada and the UK in 2012.

Powerful militaries, lack of oversight linked to waste and impunity

In a sector characterised by high-value contracts and secrecy, parliaments and legislatures can prevent the risk of corruption by passing laws to prevent it, putting issues of corruption in defence at the level of national debate, and exercising powers of oversight. Yet 85 per cent of them lack effective, accountable and comprehensive scrutiny of defence policy according to the report, ‘Watchdogs?’, which is being launched today with an evening debate in Brussels hosted by Security & Defence Agenda. “This provides opportunities for corruption to be hidden away from mechanisms of public scrutiny, and wastes money that could be better spent elsewhere,” said Pyman.

The study suggests that presidential systems are at higher risk of corruption than non-presidential systems. Corruption also seems to increase when members of the military make up a greater portion of the population, as larger armed forces may have stronger influence and lobbying power with decision-makers, undermining parliamentary oversight of the sector.

Transparency International calls on parliamentarians to establish cross-party committees and groups of external experts to empower their scrutiny and inform their debate of defence matters.

Commenting on ‘Watchdogs?’, former South African MP Andrew Feinstein said: “Legislative oversight of defence has been neglected for too long at the expense of the well-being of citizens. By showing parliamentarians how they can improve, this report is an important step in overcoming this historical neglect of defence oversight”.

2. The seven areas identified by the team were analysed by cutting the data from 19 of the indicators used in the GI 2013, and by supplementing the scores with qualitative analysis from the GI assessments, updated appropriately. The report contains 19 country case studies to highlight specific good practice. It also makes clear recommendations, and proposes practical tools, by which this good practice can be replicated in other countries.

3. Transparency International UK’s Defence and Security Programme helps to build integrity and reduce corruption in defence and security establishments worldwide through supporting counter corruption reform in nations, raising integrity in arms transfers, and influencing policy in defence and security. To achieve this, the programme works with governments, defence companies, multilateral organisations and civil society. The programme is led by Transparency International UK (TI-UK) on behalf of the TI movement. For more information about the programme please visit www.ti-defence.org.

If the countries analysed were parliamentarians, and the levels of corruption risk they displayed were political parties, the distribution of seats in the global parliament would look like the image below. 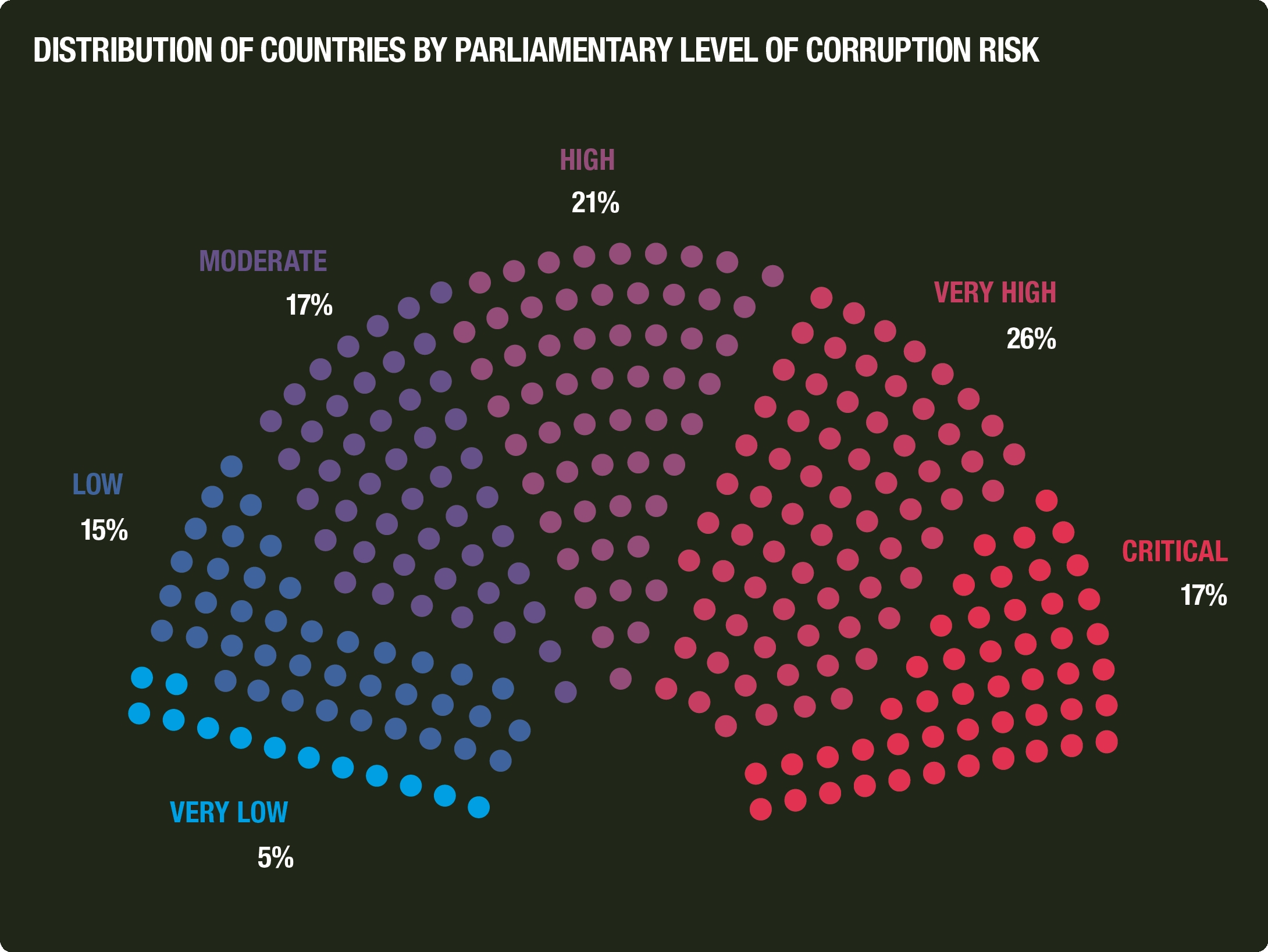