Turkey may have the right laws, the right agencies, and the resources to fight corruption but in practice it is falling short on implementation, according to a new report from Transparency International Turkey.

The executive branch of government has too much influence over other branches, particularly the judiciary, and the crackdown of the free press has made it harder for those in power to be held to account.

“What we find in Turkey is a tightening of control around the executive branch to the detriment of the other pillars of state. In our research Turkey scores very poor marks mostly because the key institutions are not independent,” says E. Oya Özarslan, the Chair of Transparency International Turkey.

The report, prepared with the support of the European Union and Open Society Foundation–Turkey, is part of a global series of research studies conducted in more than 100 countries that follow a template developed by Transparency International to measure a state’s ability to fight corruption.

The National Integrity System (NIS) report Turkey presents a holistic picture of Turkey’s institutional landscape with regard to its capacity to function, its compliance with good governance principles, and its performance in the fight against corruption. Within this framework the analysis identifies weaknesses and shortcomings affecting the whole system, as well as institution-specific areas of concern.

These are institutions analyzed in the report and their scores: 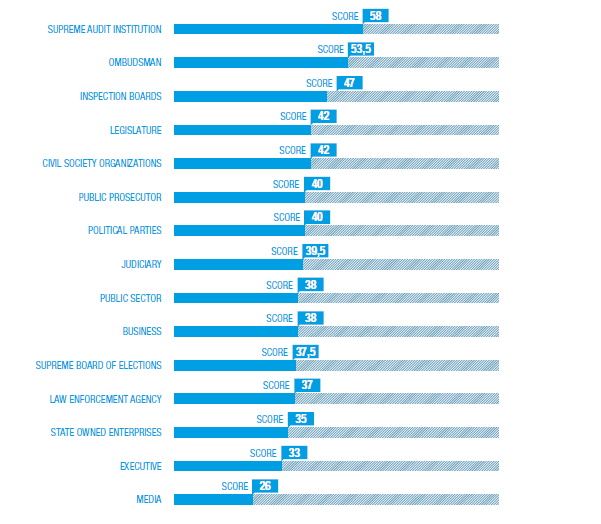 The analysis reveals that institutional weaknesses are affecting the system as a whole. Fifteen pillars of state are measured and those that score higher than 60 are classified as “strong”. None of the institutions assessed for Turkey scored more than 58; 10 are classified as “weak” and only 5 rated as high as “moderate.”

The weakest pillars are the executive branch and the media. The influence of the executive over other institutions, such as the legislature, judiciary, ombudsman, and media, is undermining of the rule of law and the functioning of democratic processes.

Consolidation of power on the executive prevents civil actors (business, media, civil society organizations) from performing their duties in effectively participating in anti-corruption measures in place.

Freedom of access to information, freedom of association, and freedom of speech, which are essential to a strong democracy are also hindered by the overarching shadow of the executive.

The major challenge for Turkey’s NIS is the failure to adhere to the separation of powers and keep the executive in check.

Despite the development of anti-corruption policies in the early 2000s, this reform process has declined in recent years as amendments to the legal framework have weakened rather than strengthened the national integrity system.

Separation of powers should be protected to allow the branches of state to check and balance each other. The Executive should maintain the Rule of Law and not overstep its boundaries defined by the Constitution.

The use of parliamentary immunity should be limited to protection of freedom of speech and should not be abused to block corruption related investigations. MPs’ regular declaration of assets that allows for comparative audits should be implemented.