Media reports that some companies are turning away from Bangladesh send the wrong signal about their commitment to worker's rights and fighting corruption, the Transparency International chapters said. Instead, they should lobby the government to pass legal reforms to uplift the integrity in the sector and dedicate greater resources to the government officials responsible for safety inspection.

“Companies leaving in the face of such tragedies, or to avoid greater regulation, will only be punishing the victims of corruption rather than the perpetrators,” said Iftekhar Zaman, head of Transparency International Bangladesh. “The alternative to dumping business in Bangladesh is to work with the government on ensuring factories apply safety rules.”

80% of Bangladesh's exports come from the garment industry. More than 85% of the sector’s employees are women. The TI chapters commended initiatives already taken by companies, international organisations and local players to support the critically important readymade garments sector in general and workers’ rights in particular.

Two major factory accidents, a building collapse and a factory fire, have focused world attention on working conditions in Bangladesh and companies that source products there. Corruption is one of the factors making it harder to tackle the problem. Negligence, lacking resources, bribes involved in licensing and permits or collusion between factory owners and safety inspections allows facilities to remain even when dangers are identified.

The Rana Plaza building, whose collapse on 24 April 2013 caused more than 1000 deaths was allegedly constructed in an illegally occupied piece of land, and lacked permission for extra floors. The Tazreen factory had three illegal floors and no emergency exits and had lost its safety certificate months before the blaze that killed 112 people on 24 November 2012.

However, corruption is not confined to Bangladesh. Nine of the world’s 10 biggest clothing producers score less than 50 out of 100 in Transparency International’s 2012 Corruption Perceptions Index, where 0 suggests extreme corruption and 100 is highly clean (see annex). This suggests widespread corruption risk which could make safety inspection vulnerable to bribery.

“The legacy of the Savar tragedy should not be to scare business and investment away from Bangladesh, but to underscore the importance of conducting business with responsibility and integrity”, said Iftekhar Zaman.

Transparency International’s chapters in Bangladesh, Cambodia and Indonesia emphasised the need for stronger enforcement of current laws and with greater human, professional, legal and institutional capacity to prevent such disasters in the future. It is the duty of the governments to enact appropriate laws in consultation with public and trade unions to assure the safe working condition for the workers and corruption free investment in their countries.

The chapters also emphasised the shared responsibility of consumers - mainly in the developed world - to demand ethically-made products. Large responsibility also lies within the governments in developed countries to assure that their companies meet national and international labour standards and do not engage in corrupt practices in conducting business in other countries. 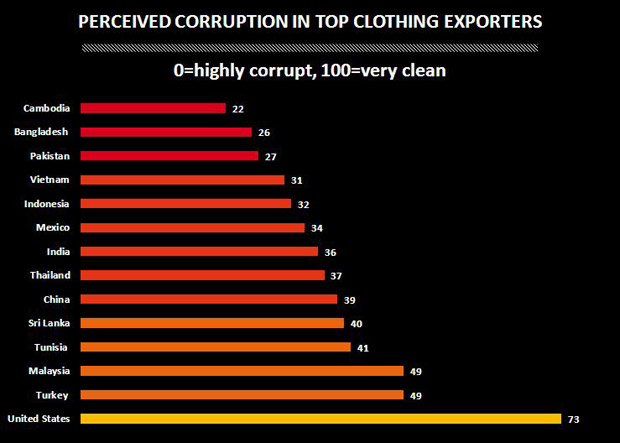