The spring election season is under way. Around the world billions of people are going or have already gone to the polls. So far there has been a change of government in India and the re-election of the African National Congress in South Africa: both new governments will have to address serious corruption issues in their countries.

From now until the end of the month nine more countries will vote for new presidents and/or new parliaments, including in the European Union.

Our chapters and offices around the world are working to put anti-corruption at the top of the electoral agenda. We want politicians to understand the key issues they must address if they want their country to be free of corruption.

The Presidential electoral process in Colombia and the peace talks between the national government and the main guerrilla group in the country – FARC-EP – are being held simultaneously. Three days before the election, Transparencia por Colombia made an urgent call to the candidates to focus on clear issues and refrain from negative campaigning.

The organisation is promoting transparency in campaign financing by: 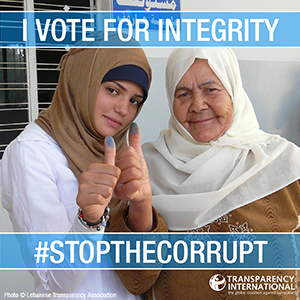 Do you want to help us get anti-corruption to the top of the electoral agenda? Here are four simple steps you can take:

Make it clear to all that you want leaders with proven integrity.

Transparency International is calling on both candidates in the Egyptian presidential election to commit to fighting corruption by supporting a pledge (below) which has received significant media attention.

Transparency International chapters across the EU are asking potential candidates to make a public commitment to integrity and transparency in EU law-making. A list of all those elected will be published here. As of 21 May, there were 300 signatures to the European Pledge.

Transparency International’s EU office is also collecting background information on the private financial interests. After the election that information will be compared with the information that newly elected MEPs provide for the public interests register.

Transparency International Spain has asked the 10 main political parties to sign a commitment to transparency and against corruption. It has also rated the parties based on 12 anti-corruption measures. Most parties scored less than five out of 10. The full results are available here.

Following the uprising in Ukraine which ousted Victor Yanukovych and highlighted the corruption in his administration, Transparency International Ukraine has been part of a group of civil society organisations working with the interim government to introduce anti-corruption legislation ahead of the presidential elections.

The elections take place following the annexation of Crimea by Russia and continued unrest in the eastern part of the country.