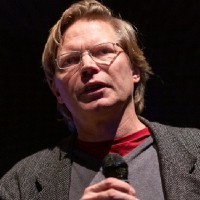 What was your highlight of 2018? For me, it was celebrated Azerbaijani journalist Khadija Ismayilova calling in to the annual meeting of the Organised Crime and Corruption Reporting Project (OCCRP) and recalling how the 2017 Azerbaijani Laundromat investigation and subsequent NGO campaign had motivated her:

Ismayilova spoke via Skype because the government has banned her from travel outside of Azerbaijan. She has been detained several times, arrested and sentenced to more than seven years in prison based on fabricated charges of embezzlement, illegal business, and abuse of power. All of this stems from government reprisals for her investigative journalism exposing the property holdings and corrupt business deals of Azerbaijan’s ruling family.

International outcry in 2016 pushed the government-controlled courts to free her, converting her prison term to a suspended sentence, travel ban and restrictions on her journalistic work.

More than a year later, why does the Azerbaijani Laundromat exposé still matter? I’ll give you three reasons…

The OCCRP investigation that partly triggered to the state-sponsored harassment of Ismayilova revealed an estimated €2.6 billion in dirty money that flowed out of Azerbaijan between 2012 and 2014. The payoffs helped launder the country’s reputation through politicians, lobbyists and “friendship societies” across Europe and also in the United States, as well as with those connected to the United Nations Educational, Scientific and Cultural Organization (UNESCO) and other important international bodies.

The money came from companies linked to Azerbaijan’s president, Ilham Aliyev, the Azerbaijani government and the International Bank of Azerbaijan. Using four UK-based shell companies, the dubious money flowed through the Estonian branch of Danske Bank of Denmark to various countries, including Germany, France, Turkey, the United Kingdom and the United States.

.@Khadija_Ismayil - under travel ban in #Azerbaijan - tells #18IACC how the laundromat scheme help the corrupt rob her country. pic.twitter.com/sY8jT00ZtS

One year on, however, the Azerbaijani Laundromat scheme seems to be a case study in impunity. The trail of dirty money led to the Parliamentary Assembly of the Council of Europe (PACE), where witnesses told the independent investigators about brown-envelope bribes being passed out to country delegations before a vote on resolutions on the human rights situation in Azerbaijan.

More than 40 people told investigators about parliamentarians violating the organisation’s Code of Conduct, receiving Azerbaijan-related gifts and benefits and other serious corruptive activities involving money. The investigation found fault with the conduct of almost 20 current and former parliamentarians.

Corruption charges were pressed in Italy against former PACE parliamentarian Luca Volontè, who the prosecution believes, received €2.39 million from an Azerbaijani lobbyist. Authorities there are looking into the flow of money through Danske Bank using offshore shell companies.

The Reformist Movement, a centrist Belgian political party, convened to question politician Alain Destexhe about his connections to Azerbaijan. He apparently faces investigation, but there have been no convictions yet in either case. These and other cases of impunity were summarised by the watchdog NGO European Stability Initiative at the end of 2018:

· Destexhe remains a member of the Belgian Senate and is publicly praised by his ally, Belgian foreign minister Didier Reynders.

· German politician Karin Strenz (CDU), who was financed by Azerbaijan to lobby at the Council of Europe, remains a member of the Bundestag and has yet to be sanctioned for any ethical infraction.

· Spanish politician Pedro Agramunt, clearly connected by the Council of Europe to the allegations of vote-rigging, remains a member of the Spanish Senate. In response to Transparency International’s public campaign to send letters to Spanish prosecutors, the country’s authorities notified Transparency International Spain that the independent investigation’s report does not provide legally actionable evidence for the authorities to pursue criminal cases against the Spanish delegates implicated in the scandal. We don’t think they’ve looked closely enough.

PACE was not the only target of the Azerbaijani campaign. Members of the European Parliament have in the past been invited by organisations close to the Azeri government on junkets to the country. EU parliamentary investigations in 2013–2014 found seven members in breach of the Code of Conduct for not having declared their trips to Azerbaijan paid for by those organisations.

At the European Parliament, members voted to set up a similar corruption investigation but it has never happened. “Following the recent revelations, attempts by Azerbaijan and other autocratic regimes in third countries to influence European decision-makers through illicit means [the European parliament] calls for a comprehensive parliament investigation,” the resolution stated.

No action has been taken by the EU parliament since then.

2. What Aliyev is trying to cover up: human rights violations

In the last weeks of 2018, Azerbaijani authorities froze Ismayilova’s bank account just as the Baku Economic and Administrative Court fined her €23,000 Euro for allegedly failing to pay taxes while she worked as the local bureau chief for Radio Free Europe (RFE). Ismayilova has said that she was not responsible for the organisation’s finances, while RFE was tax exempt in Azerbaijan anyway. The Organisation for Security and Cooperation in Europe (OSCE) Representative on Freedom of the Media, Harlem Desir, reacted immediately. He expressed his deep worry that that Azerbaijan state institutions continue to hinder her professional activity as a journalist. He noted that she has had to endure numerous cases of harassment and intimidation for her critical reporting in recent years.

Ismayilova’s case is illustrative of what life is like for you if you fight corruption and speak against injustice in Azerbaijan. In its annual report on human rights and democracy, released in November 2018, the European Parliament noted its repeated, urgent calls on the Azerbaijani authorities to end the selective criminal prosecution of those who criticise the government. And, marking this year’s Human Rights Day on 10 December 2018, the Institute for Reporters’ Freedom and Safety (IRFS) called for Azerbaijan to be held accountable by UN and other international and regional bodies for the ongoing crackdown on peaceful dissent and anti-corruption activists.

Generally, the people of Azerbaijan have been paying a heavy price for the grand corruption and political oppression in their country. The authoritarian government has virtually closed the space for independent activism, critical journalism, and opposition political activity through arbitrary arrests and unjust convictions according to both Human Rights Watch and Amnesty International.

After this corruption scandal, has it become harder for Azerbaijan or any other country that wants to launder its reputation? Unfortunately, not much. Organised political criminals have to hide the bribes a bit better but there is nothing to prevent them from undermining the integrity of other international bodies like the Council of Europe in the same way. Nonetheless, as we start 2019, the increased scrutiny now means thatmore people are watching Azerbaijani influence in Europe, and in high-value property markets.

In the UK, the Solicitors Disciplinary Tribunal has the power to punish lawyers enabling grand corruption. In December 2018, the Tribunal looked into the help a lawyer’s gave to Leyla and Arzu Aliyevain, the daughters of Azerbaijan’s president, to set up a secret offshore company to buy two apartments worth £60m in London. The enabler in this case was Khalid Sharif, a senior partner at the London law firm of Child & Child, who admitted that he set up the shell company in the British Virgin Islands for the two without carrying out any of the mandatory money-laundering checks. Alieyev’s two daughters were not charged with any crime. Sharif was fined £85,000 by a disciplinary tribunal but no criminal investigations appear to have begun against him.

As Ismayilova observes, it was not just the journalistic reporting but the activism and advocacy of TI and other civil society partners like European Stability Initiative that made a difference by prompting the growing calls for accountability. She says: “These steps — these efforts all together — helped stop the dirty lobby in the Council of Europe. It basically made European politicians more responsible.”